4 Types of Natural Disasters and Their Specific Injuries 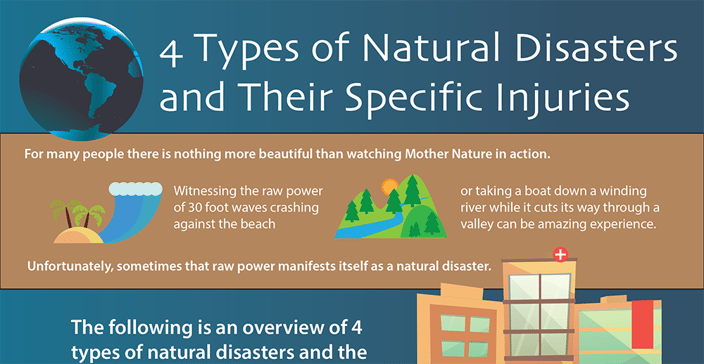 For many people there is nothing more beautiful than watching Mother Nature in action. Witnessing the power of 30 foot waves crashing against the beach or taking a boat down a winding river while it cuts its way through a valley can be an amazing experience. Unfortunately, sometimes that power manifests itself as a natural disaster. The following is an overview of four types of natural disasters and the specific injuries that a hospital would usually encounter.

The abrupt and violent nature of earthquakes mean many injuries are due to falling objects.  After an earthquake, a hospital is more likely to encounter crush injuries and if at night, many of those injuries will be focused on the pelvis, chest and legs since many victims will have been laying down. Conversely, if the earthquake takes place during the daytime, the hospital is likely to see an influx of head trauma and lacerations from broken glass or other material.

In the United States, floods account for more deaths than all other disasters on this list. A hospital must be ready to encounter victims that have been exposed to the elements for long periods of time before they could be rescued. Hypothermia, trauma from falling debris, and lacerations are just a few of the injuries a hospital will encounter during a flood.

During a hurricane, a hospital must be equipped to withstand the hurricane itself as well as provide medical care to the victims. Like many disasters, hurricanes can cause secondary events such as storm surges that can be deadly and provide their own set of specific injuries.

Second to the storm surge, winds are the second most lethal facet of a hurricane. Wind can send large objects flying as well as collapse structures. Lacerations and crush injuries are common.

Since tornadoes often occur with little to no warning, many victims are in structures when they hit. This means crush injuries are common. Also common are lacerations from flying projectiles such as glass or anything else the wind catches. If a victim is caught outside during a tornado, they will often exhibit an abrasion on their skin from being hit by accelerated elements such as soil and water. Compound fractures, which have an increased chance of infection, are also somewhat more common during a tornado.

These are just a few of the injuries that can occur during these different disasters. Unfortunately many of the disasters can cause secondary disasters such as an earthquake causing a fire. It is important for hospitals to always be prepared with the tools to provide efficient lifesaving care to the people who need it the most.

Social post: Is your hospital prepared with all of the tools for a natural disaster? Loss of power can mean loss of life. Be prepared.

Editor's Note: This blog was originally published on May 29, 2015. It has been re-published with additional up to date content.