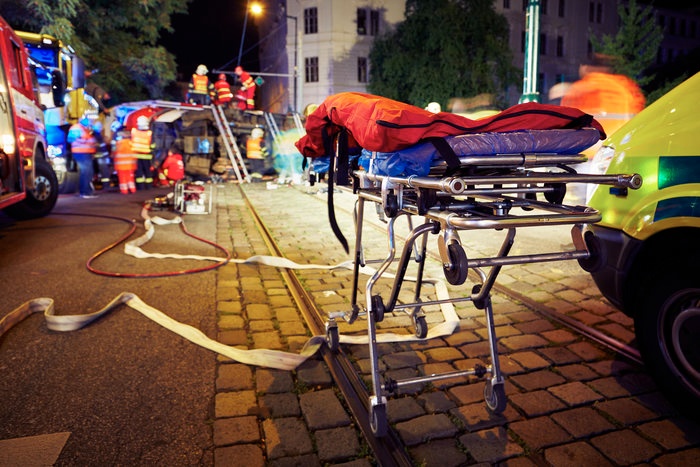 The boy had been struck while darting his bike across the busy intersection. He failed to see the minivan approaching the turn lane. Just as he thought he had made it safely across, the minivan appeared suddenly, striking him and knocking him twenty feet from his bike. The height of the minivan’s bumper was directly in line with the boy’s head. The result? Massive facial trauma resulting in one of the most difficult airways of your career. Fortunately, you had a well-stocked trauma bag, containing everything you’ll need to secure the airway, and the foresight to carry one of your most essential airway tools: your portable suction unit.


When you think about airway compromise, you should automatically think portable suction unit. And when the compromise is caused by traumatic injury, that suction unit can mean the difference between a patent airway and terminal hypoxia.


So let’s review a few of the traumatic injuries that inevitably compromise the airway, keeping in mind the life-saving application of suction on these most serious patients.


Le Fort fractures make up some of the most serious facial injuries your patient can sustain. They can result from any type of high-energy force to the face—for example, an unrestrained driver who strikes the windshield, or the boy at the beginning of our story. Le Fort fractures are classified into three general categories (although some criteria include a fourth, based on the presence of associated frontal bone fracture):

1. Le Fort I – a fracture resulting in the separation of the hard palate from its bony frame, resulting in instability of the maxilla

2. Le Fort II – a pyramidal fracture that separates the upper palate and nasal bones from the surrounding bony frame

3. Le Fort III – also known as a craniofacial disruption, Type III fractures separate the bones of the face from the surrounding frame


No matter what level of Le Fort fracture your patient sustains, you can bet his or her airway will be compromised. Blood, saliva, and facial instability will necessitate that you keep the portable suction unit nearby.

Although rare, any traumatic injury that impacts the laryngotracheal structures, whether from blunt or penetrating trauma, can mean a rapid deterioration in your patient. Some of the signs and symptoms of laryngotracheal injuries are:

These are obviously critically ill patients who are destined to have a compromised airway. So stay alert, treat aggressively, and have suction on hand.

With any serious brain injury, it is safe to suspect airway compromise. The respiratory drive itself can be affected, the patient’s level of consciousness may be altered, and his or her ability to protect his or her airway will be greatly impacted. And with associated trauma, you may have a combination of these syndromes along with profuse bleeding into the oral cavity. Types of head injury include:

No matter the nature of the trauma, whenever it impacts the face or head, it will likely impact your patient’s airway as well. So the safest approach is to include a reliable portable suction unit as part of your first-line trauma gear. Trauma treatments are always a race against time—a race that can only be won with a patent airway.