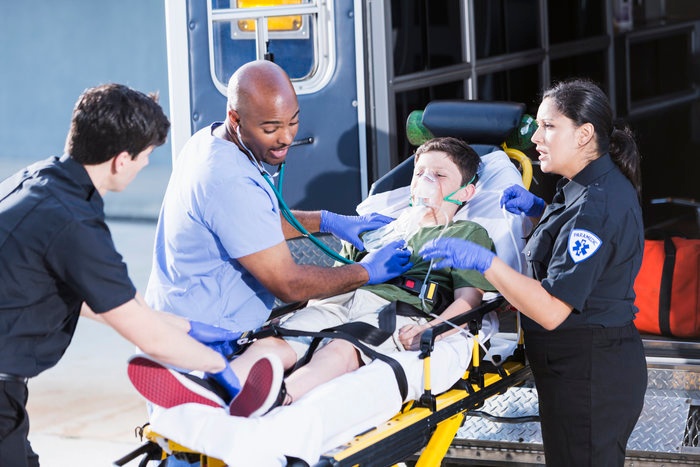 Let’s face it: Pediatric patients make even the most seasoned paramedics a bit nervous. Because adults make up the majority of EMS patients, when that little one comes along, it can produce anxiety even among the most experienced medics. And when the child is having trouble breathing, your apprehension can go through the roof.

So let’s focus on one of your most integral skills when treating pediatrics: early recognition of respiratory insufficiency.

A child in distress doesn’t respond like an adult would in the same situation. Adults are able to communicate their distress, whereas children tend to shut down. They become frightened and may shrink from caregivers, which only compounds their anxiety as their breathing becomes more difficult. Every second counts, which is why you must be able to rapidly, yet thoroughly, assess these small patients.


Respiratory distress is characterized by an increased work of breathing. At this point, the child is getting enough oxygen—therefore, his or her general appearance may be normal—but he or she will exhibit signs of increased work, such as:


Quick action on your part can prevent the child from slipping into the next phase, that of respiratory failure.


Respiratory failure occurs when the extra work of distress has caused the child to exhaust his or her energy reserves. At this point, he or she can no longer maintain adequate oxygenation and ventilations. Signs of impending failure include:


Time is of the essence! Without immediate treatment, your patient’s next phase is complete arrest.

Now that we’ve reviewed the difference between distress and failure, let’s discuss some of the underlying causes of respiratory insufficiency in children. According to the American Academy of Pediatrics, these underlying causes can be broken down into five general categories:

1. Obstruction of the airway – secondary to conditions such as asthma, croup, bronchiolitis, and a foreign body

3. Chest-wall muscle fatigue – as seen during ongoing respiratory distress, or from conditions such as muscular dystrophy (a genetic disorder that causes generalized muscle weakness)

5. Chest injury – such as rib fractures, pulmonary contusions, and pneumothorax

Treating children in respiratory distress or failure is no time for pause. You must treat aggressively, with confidence and decisiveness. Here are a few reminders:

Recognizing the signs and having a plan will result in rapid, life-saving treatment for children experiencing a respiratory emergency.