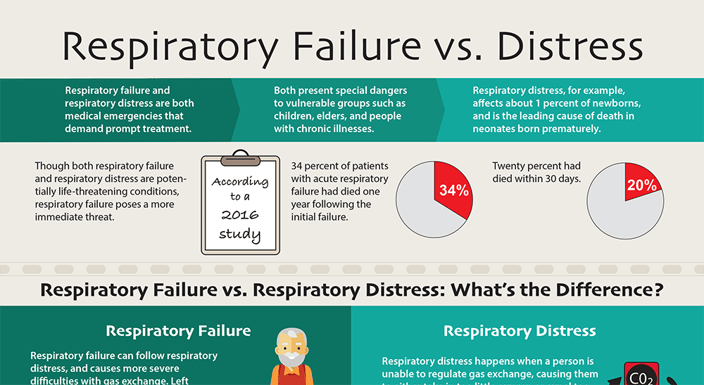 Respiratory failure and respiratory distress are both medical emergencies that demand prompt treatment. Both present special dangers to vulnerable groups such as children, elders, and people with chronic illnesses. Respiratory distress, for example, affects about 1 percent of newborns, and is the leading cause of death in neonates born prematurely.

Respiratory distress and failure are serious ailments that may foretell bad outcomes, even in patients who seem otherwise healthy. About two-thirds of people with respiratory distress develop impaired pulmonary function one or more years following their recovery. So it is important to refer patients for follow-up care and to advise them that, even after recovery, respiratory impairments may warn of serious medical problems.

Signs and Symptoms of Respiratory Distress

Signs and Symptoms of Respiratory Failure

Some other symptoms of respiratory failure include:

Determining whether the problem is with ventilation or oxygenation—or with both—can help with guiding treatment decisions. Some questions to ask include:

The Importance of Choosing the Right Equipment

Maintaining a patent airway is critical to the survival of people who are experiencing respiratory emergencies. Protecting the airway can prevent respiratory failure, buying time and reducing damage to the brain and other vital organs. Portable emergency suction enables medical providers to treat patients wherever they need care, without delaying treatment or undertaking the risk of moving a patient who is already facing a crisis. The right equipment saves lives and improves care outcomes. For help choosing the option that’s right for your organization, download our free e-book, The Ultimate Guide to Purchasing a Portable Emergency Suction Device.