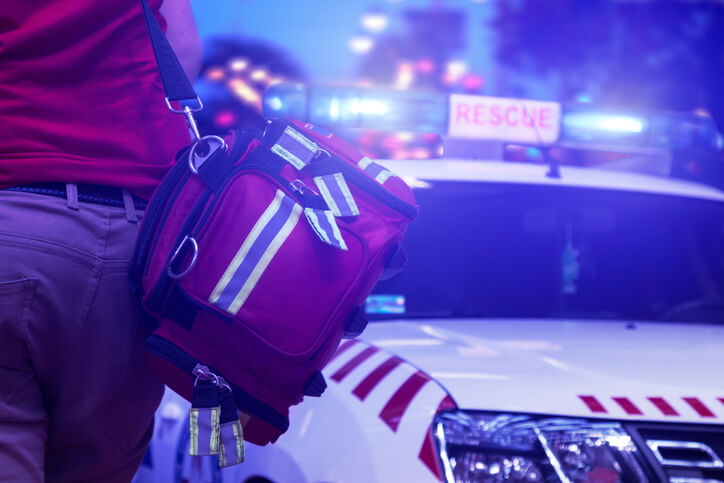 Last August, on a calm Sunday at the southern coast of England, people strolling along the shore were suddenly engulfed in a strange chemical cloud. More than 130 people were treated at an area hospital for complaints ranging from sore throats, to streaming eyes, to difficulty breathing.¹ The source and the identity of the cloud have yet to be determined, but the event is a reminder that hazardous materials can cause a range of medical issues—one of the most serious being respiratory emergencies.

As an emergency responder, you will likely encounter scenes involving hazardous materials. Overturned tankers, train derailments, and the rise in clandestine meth labs mean you will be treating patients exposed to a range of dangerous chemicals, many of which will compromise the respiratory system. Below, we explore three respiratory emergencies involving hazardous materials. The chemicals we cover have been deemed pulmonary agents by the U.S. Department of Health and Human Services and may cause irritant gas syndrome, a condition with symptoms that include eye, nose, and throat irritation, as well as cough, wheezes, and dyspnea.²

Anhydrous ammonia is a colorless, noxious gas that is compressed into a clear liquid under pressure. It is a common component in nitrogen fertilizers, but is also used in the production of illicit methamphetamine. Ammonia dissolves readily in water to form alkaline ammonium hydroxide, making it dangerous for those exposed, because it produces corrosive injuries to the eyes, gastrointestinal tract, skin, and lungs.

Patients exposed to ammonia will likely exhibit shortness of breath, severe cough, and chest tightness, along with chemical burns, depending on the extent of exposure. Damage to lungs and eyes can continue for several days, so patients experiencing symptoms should be transported for evaluation and observation.

Ammonia can cause severe reactions in the respiratory tract, including laryngospasm and respiratory arrest, so exposure should be treated aggressively. There are no antidotes for ammonia, so be prepared to provide supportive care, including assisting ventilations, intubation, and suction. Severe cases may require a surgical cricothyrotomy.

Chlorine is a yellow-green gas that is water-soluble and readily absorbed by the upper airway. It is used to disinfect drinking water and pools. Inhalation of the gas can cause immediate symptoms, including stridor, wheezing, rales, hemoptysis, and pulmonary edema. Like ammonia, chlorine exposure can also lead to laryngospasm and respiratory arrest.

Chlorine also affects the heart, causing tachycardia and hypertension, which can then transition to hypotension. If ingested, it can cause substernal chest pain, abdominal pain and rigidity, and perforation of the esophagus and stomach. Patients may also experience burning pain, inflammation, and blisters with skin exposure. Exposure to liquefied chlorine can cause frostbite injuries.

Treatment for chlorine exposure includes bronchodilators for those experiencing bronchospasm. Consider an advanced airway or surgical cricothyrotomy for laryngospasm, and if the patient exhibits frostbite injuries, submerge the affected parts in warm water and handle with care.

Phosgene is an industrial chemical commonly used in pesticides and was used as a pulmonary agent during WWII. Phosgene is a liquid below 47 F° and a gas above that temperature. It has the odor of freshly mown hay, but once it reaches the threshold where it can be smelled, it has already surpassed safe inhalation exposure limits.

Immediate respiratory symptoms include irritation and bronchitis. Pulmonary toxicity can occur at higher concentrations or if the patient has been exposed for longer periods of time. Signs of toxicity include choking, chest tightness, cough, severe dyspnea, production of foaming bloody sputum, and pulmonary edema.

Although severe symptoms may be delayed up to 48 hours, in the case of pulmonary damage, the patient may develop progressive pulmonary edema, hypoxia, and cardiac collapse. Treatment is similar to chlorine exposure, with the added measure of limiting physical exertion, because even minimal activity can exacerbate symptoms.

All three of these agents can lead to severe respiratory compromise, arrest, and even death, so before you treat the patient, be sure to protect yourself. Scene safety is critical when hazardous materials are involved, and you will be no good to the patient if you become a patient yourself.

Stage upwind and do not enter the scene without first identifying the material (via placards or informants). Only those specially trained and fully protected should enter the hot zone.

Respiratory emergencies involving hazardous materials can be life-threatening—not only for the patient, but for rescuers, as well. Take adequate precautions, ensure scene safety, and treat respiratory symptoms aggressively.